ZigBee is the specification for a suite of protocols designed for wireless personal area networks (WPAN). It is based on the IEEE 802 standard. The term Personal Area Network is coined to provide differentiation from Local Area Network (LAN) and Wide Area Network (WAN). It should be understood to be of small size and not related to an ‘individual’.

The data rate is variable with a maximum achievable of 250 Kilobits per second.

The theoretical max distance between devices is 120m line of sight although 40-50m is considered a realistic maximum in an urban environment.

The radio band used is ISM (International Scientific and Medical). The band varies geographically, with Europe on 868MHz, USA and Australia on 915MHz and the RoW on 2.4GHz.

There are typically 12 different radio channels available to ZigBee. All devices on a PAN must be on the same channel. The channel selection is normally automated by the Coordinator (The Coordinator is a special task ZigBee device; every ZigBee PAN contains one and only one Coordinator).

A ZigBee device has four addresses:

The drawing below shows a summary of the radio channel and addressing hierarchy. 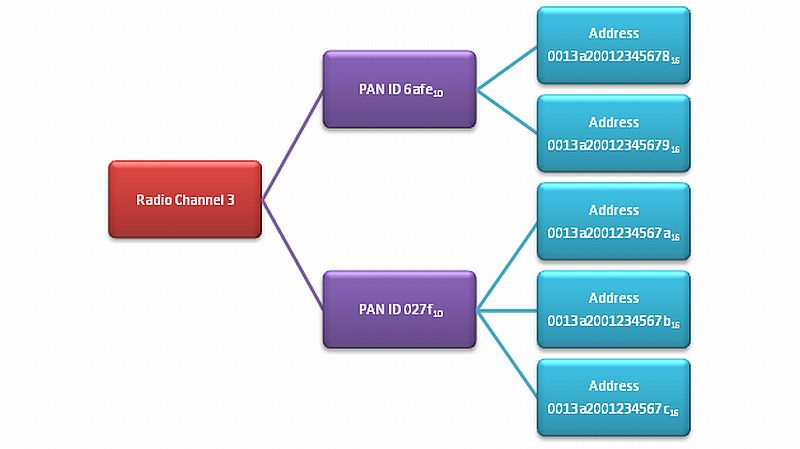