Portugese company, JFS, recently enlisted the help of lighting control expert, Artistic Licence, to illuminate the spectacular Castelo dos Mouros (Castle of the Moors) at the Sintra UNESCO World Heritage site. The Castelo – a commanding cliff-top structure built by the Moors in the 8-9th Century – was given a dramatic after-dark presence through the use of feature lighting to pick out the contours of its fortified perimeter walls.

JFS brought in Artistic Licence to advise on and supply the network control system. Ensuring the smooth integration of the project, JFS also managed all the follow-up, programming and commissioning stages of the installation.

Show-programming was achieved using the Artistic Licence Colour-Tramp controller, requiring a total of 2 DMX Universes for 600 addresses. A key feature of this product is its ability to provide faithful spatial rendering of the fixtures on screen, enabling the entire show to be visualized during programming (see screenshot below). 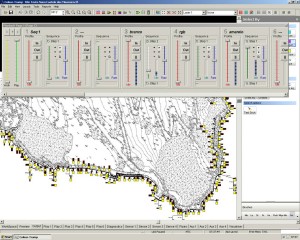 Given the scale of the installation, viewing the complete extent of the walls required a vantage point in the town some 3 km distant from the Castelo. From here, the show files were uploaded to the Castelo control room equipment using a unidirectional Wi-Fi link.

Artistic Licence’s Multi-Play Rack, a hardware product for show recording and playback, was used for on-site control. Storing the Colour-Tramp files in its memory enabled a range of everyday shows to be recalled and triggered using the in-built real-time clock, while for special events the system could be used manually. In order to convert Multi-Play’s Art-Net output into DMX, an Artistic Licence Art-Lynx O/P device was used. Finally, given the high channel count, distribution of the data required the use of DMX splitters which were supplied in the form of two Rail-Split RDM units.

By providing comprehensive training for the end-user, JFS anticipates that the system’s features will be used to maximum effect going forward.