Artistic Licence CEO, Wayne Howell, took part in a lively panel debate entitled “Is DALI dead?” at the recent Smart Lighting Controls Conference in London. The participants – who also included David Mooney of Atkins, Sam Woodward of Lutron, Andrew Glossop of Helvar and independent lighting designer Tad Trylski – were assembled to discuss the relevance of the DALI control protocol in a market being shaken up by the arrival of smart, connected IP based lighting.

A snap poll at the outset by moderator Robert Bain of Lux magazine revealed that no-one on the panel thought DALI was pushing up the daisies just yet – as Trylski pointed out, if it died, then what killed it? But it was a comment from Howell that we might see DALI in “a change of clothes” in the future that underscored one of the main threads of the subsequent discussion – that of DALI’s evolving status.

Several members of the panel pointed out that DALI currently suffers from interoperability issues; this arose because the original specification did not cover control devices. As a result, while one manufacturer’s DALI products will all talk to each other, this is not necessarily true if an installation uses DALI products from a range of manufacturers.

Glossop felt that increased opportunities for testing DALI products, borrowing from the ‘plugfest’ idea common in DMX/RDM product development, would go a long way to solving this problem. Howell anticipated that a resolution would be found in the new DALI 2 standard (which will provide control definitions), coupled with better training of commissioning engineers. 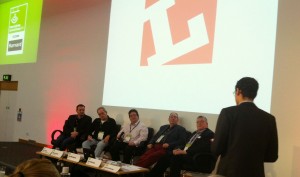 The panel nevertheless seemed impressed by DALI overall – the protocol was described simply as “fit for purpose” by Glossop and “a good standard tool” by Woodward. Mooney emphasized the importance of having an open domain standard, while Trylski praised the success of DALI’s physical layer – a simple wiring arrangement that is friendly for electricians.

Howell’s opening comment about DALI undergoing a “change of clothes” may hint at deeper changes to come. In a recent development, a new protocol has been launched that enables DALI to be transported over ethernet, in much the same way that Art-Net revolutionized the transport of DMX in the entertainment industry. For more information, check out Art-Osc.